There’s no doubt that the crust on your pizza is not the same thing as your loaf of wonder bread in the pantry.

But, that doesn’t mean it’s not bread. Visit any bakery and you will get an eyeful of large varieties of bread, both familiar and strange. Does that mean pizza dough is the same as a type of bread?

It sure is. Cooked and risen pizza dough may not resemble the traditional loaf of bread in your pantry but it is a type of bread nonetheless. The bread in pizza dough consists of yeast, salt, flour, and water.

The texture is definitely different, with pizza dough having a more chewy aspect to it than regular bread. Plus, pizza dough is generally seasoned with a variety of spices and a lot of butter, like garlic bread.

At the very start, the difference between regular bread and pizza dough isn’t recognizable. They both begin virtually the same. It’s where they end up that is completely different. There are plenty of distinct differences along the way.

In terms of visual comparisons, there’s no distinction between the two. However, pizza dough is generally more finely milled and, as a result, has a lowered gluten level than that of standard bread. Of course, you can find bread on the shelves with lower gluten all the time but this is in terms of generalizations.

Ask any baker and they would be happy to tell you that you can take pizza dough and make a regular loaf of bread out of it. You don’t need to make any adjustments to the ingredients, just the process that takes place after the formation of the dough.

That’s right—both doughs are completely interchangeable. Since bread dough is typically more infused with yeast than pizza dough, you will get more of a rise out of it as it bakes in the oven.

One of the biggest things you would have to do with bread dough (if you’re making a pizza with it), is stretch it out so it’s nice and thin. With bread, everything is fattened up in the middle and the resulting loaf is cut into slices.

However, with pizza, you need a thin stretch with the edges rolled up to form the pizza crust.

If you prefer a more “bread-style” crust for your pizza, don’t stretch it out too thin and roll up your edges larger.

If you want to make bread with pizza dough, you’ll do the exact opposite. Of course, there are multiple ways to form and bake bread, just like pizza has more than one type of crust. You can either roll the pizza dough up into a large loaf or you can make pizza crust in whatever shape you want and eat it like bread.

Using pizza dough to form bread affords you some additional freedoms, especially if you like garlic bread. Since pizza dough doesn’t contain as much yeast as bread dough, you will have to let it “proof” longer. This basically means allowing it to air out before it goes into the oven.

This will allow the dough to rise better and more evenly.

While the argument can successfully be made that both doughs are pretty much the same, other ingredients can go in as well, further dividing the two types of dough from each other.

Both pizza dough and bread dough allow for the addition of optional oil with bread being enriched far more often than a pizza. Hydration levels are generally higher in bread dough than in pizza dough. This is because it aids the bread dough in rising, where it’s not necessary for pizza dough.

Pizza dough doesn’t spend the same amount of time going through the kneading process as bread dough. Typically, one to five minutes is all you should take to knead pizza dough before it’s ready for the next step.

Bread, on the other hand, requires more kneading time. Kneading the bread dough thoroughly and for longer periods reduces the holes in the baked result. Of course, this is desired in certain types of bread but not in a standard loaf you purchase at the grocery store.

The fermentation process is a little more extensive with bread as well. Bread requires more rises than pizza dough for the same reason it requires more kneading—to reduce the number of holes in the final product.

Pizza dough is arranged very thin and doesn’t need to be kneaded nearly as much as bread. In fact, pizza dough spends roughly half the amount of time being kneaded than bread dough.

Pizza dough is also cooked at much higher temperatures. It forces the crust to rise to its peak faster and form a more crispy texture that still remains doughy and chewy below the surface.

You can’t cook bread at such high temperatures because it’s formed thicker than a pizza. A high temperature would cook the outside of the bread too fast, leaving the center undercooked.

Pizza dough and bread dough starts out as much the same thing. However, the process changes everything and the end results are two different things entirely.

You can certainly use pizza dough to make bread, however, and vice versa if you need to. Other than the very beginning of the process though, the two couldn’t be further apart. 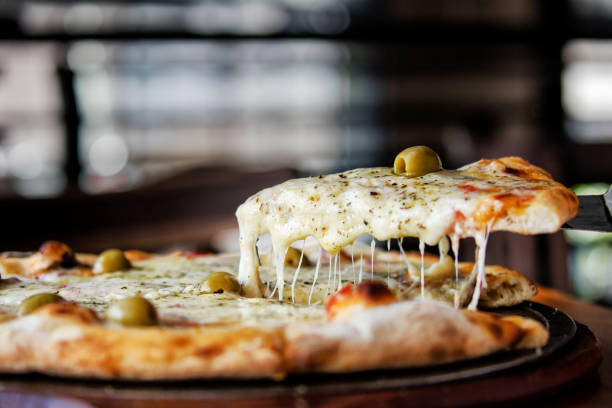