Why Do Pizzas Bubble? (The Answer May Suprise You) 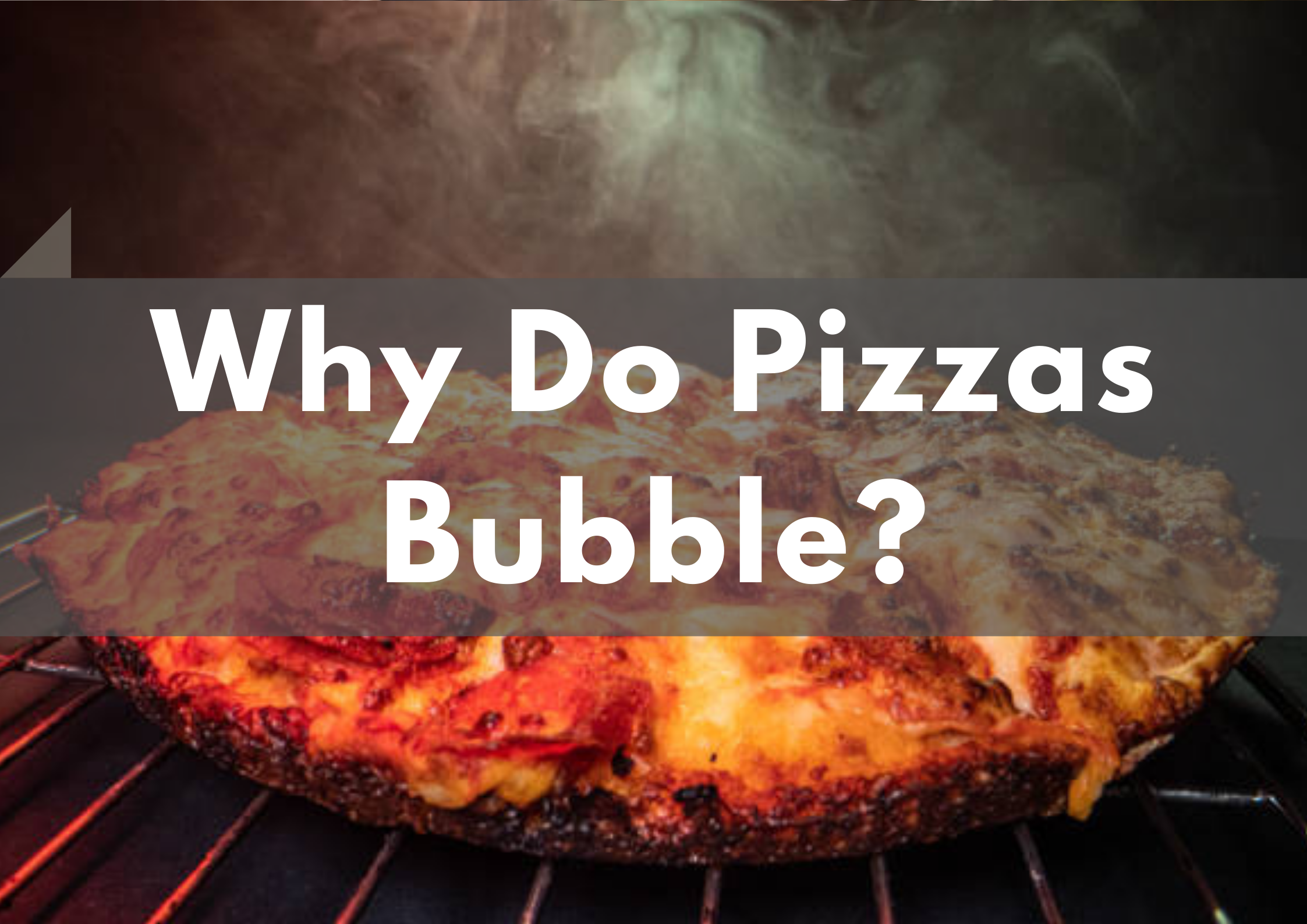 A simple question to answer, you might think: Why do pizzas bubble?

But actually, it’s quite a complicated thing to explain based on when you’ve noticed the pizza is bubbling.

It also gets more complicated when you research it as I have done.

But don’t worry, I’ll clear up the whole mess as best I can to help you understand why your pizzas are bubbling, how to encourage more of it when you want it to bubble, and how to stop it when you don’t!

Simple enough, right? Well, let’s hope so because we’re about to dive in!

When Pizza Bubbling Is Good

Air bubbles being formed in your pizza dough _before baking _is a good thing.

In fact, it’s a REALLY good thing because it means the yeast in your pizza dough is working as it should, and when you give the yeast the chance to do its thing, you get a great-tasting pizza base.

Trust me, I learned the hard way by sacrificing flavor for convenience and ignoring the proving stage, and that’s the worst thing you can do for your pizza.

So, air bubbles are created when you leave your pizza dough to prove. This is caused by the yeast in the dough breathing out carbon dioxide.

To help your dough rise (when proving you want it to double in size) the yeast eats any sugars in the dough and releases the carbon dioxide.

As it does this, it pulls in moisture from water in the dough, helping it grow in size. The dough will double in volume and gluten will form, giving the dough that stretchy, classic pizza dough feel.

By letting your dough prove in a warm environment before baking, the yeast is able to work on the glucose and fructose levels in your dough, releasing bubbles, but leaving behind some of the best-tasting pizza dough you’ve ever had.

Bubbles at this stage are exactly what you’re looking for.

How To Make Your Pizza Dough Bubble More

If your pizza dough isn’t bubbling during the proving stage, then the reason is likely one of these:

When you haven’t used enough yeast, you might be able to add more to the dough and restart the process.

If this doesn’t work, start from scratch. But remember, not proving your pizza dough isn’t bad for you – it’s still perfectly safe to eat, it just won’t have as much flavor.

So I say just cook this pizza, and try to remember to use more yeast next time.

If the proving environment isn’t warm enough, then just move the dough.

Not somewhere that’s too warm, or else the yeast will become overactive and the dough will lose all its texture and taste.

A great place I’ve used is just in an oven with the interior light switched on.

It doesn’t need any heat in the oven beside the light, and after a few hours, it ought to have doubled in size and be ready to bake.

How Do You Know When The Pizza Has Stopped Bubbling?

When the pizza dough has stopped bubbling, it’s time to bake, but how do you know when it’s finished?

Well, you have to wait for the large air bubbles to have finished forming and popping and for the dough to be at least twice the size it was before proving.

Smaller air bubbles at this stage aren’t necessarily a bad thing, because if you overproof the dough, the yeast will stop working and affect the taste and texture again.

So, small air bubbles are fine, and I’ll show you how to get rid of these so they don’t mess up your pizza while baking in the section below.

The key is the size of the dough. Once it’s twice the size and there are no more large air bubbles, it’s ready to go.

When Pizza Bubbling Is Bad

If your pizzas are bubbling in the oven, though, this is a bad thing.

Large air bubbles at this stage will throw your pizza toppings off and create an oddly shaped pizza.

Small air bubbles in the oven will burst and burn easily in the heat, creating black burned pockets of pizza all over.

So, if you’ve noticed your pizzas bubbling in the oven, then this is a bad thing.

There’s not a lot you can do to fix it now if the bubbles have already formed and burst.

But there are some things you can do moving forward to stop your pizza bubbling while cooking, and I’ll share them with you below.

How To Stop Your Pizza Bubbling While Cooking

There are several things you can do to prevent bubbling pizzas in your oven from ruining your dinner.

The biggest reason for your pizza bubbling while cooking is that you didn’t prove it.

Think about it, the yeast needs a warm environment and a few hours to work on the dough, releasing the carbon dioxide bubbles while it does it.

If you don’t give your dough that time, the second it enters your warm oven, it’ll start becoming active, releasing those large carbon dioxide bubbles and throwing your toppings to the side while it does it.

So, prove your dough until it’s doubled in size and those large air bubbles are gone. But what about the small air bubbles?

2. Use A Dough Docker

Earlier, I told you small air bubbles are fine while proving, but they’ll pop and burn while baking, so you need to get rid of them.

The worst thing you can do is start punching the dough to remove the bubbles because you’ll knock all the good air out of it too and the resulting pizza will be flat and uninteresting.

What you can use, though, is a dough docker.

These nifty devices just run over the base of the pizza before you add your toppings to release those small air bubbles ahead of time.

That way, when it enters the oven, there won’t be any small air bubbles to pop and burn, and your pizza will be much more delicious!

If, for some reason, your pizza is still bubbling in the oven (it shouldn’t be, but if it is) just pop the bubbles with a knife.

You can stop the bubbles from ruining your entire dinner if you catch them before they burst.

If you control how they burst, then they won’t throw your toppings off or catch and burn in the oven because you’ll have burst them early, and made the pizza flat again so it will cook evenly.

Don’t feel you have to sit and watch your pizza like a hawk, though.

With the other 2 methods above, your pizza shouldn’t bubble in the oven.

Just check in now and then to check on the progress, and if you notice any bubbles, pop them and put them back in the oven and your pizza will be perfect once cooked.

No, I’m not suggesting you get takeout instead to avoid the whole pizza bubbling fiasco!

After reading my post today, I’m actually hoping the whole thing has been cleared up for you and you’ll be tempted to try making your own pizzas at home some more.

If your pizza has been bubbling in the oven and losing all its toppings or burning as a result, hopefully, the three tips above give you the confidence to go back and try again.

And if you’ve been worrying about your pizza dough bubbling during the proving stage, then relax – this is exactly what you want and it’ll create the perfect pizza.

So, whichever way you slice it, I hope today’s post has helped you realize that the perfect homemade pizza is much easier than you think. 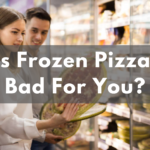 Is Frozen Pizza Bad For You? (Surprising Results) 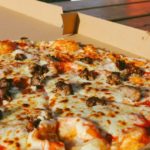 Have you ever wondered how long you should cook a pizza if your oven is set to 450 degrees F? Getting the cooking time right is critical to enjoying a perfectly crispy pizza that tastes great and has a wonderful… If you haven’t got a Gozney Dome yet, then have you been living under a rock? Serious question. No, I’m joking, of course. You know I’m not one to force products on people if they have a pizza oven they’re… How To Sharpen A Pizza Cutter: Easy Step by Step Guide

Almost everybody knows the perfect way to sharpen a knife because it’s something we use so often. We have to learn how to sharpen it, or else we’ll always be replacing our knives because they get dull quickly when they’re…