Why Is My Pizza Crust Not Browning? 7 Tips For Killer Crust The only thing more delicious than eating pizza is eating pizza that you’ve made. But the problem-which I unfortunately discovered of late-that most homemade pizza enthusiasts face is how to make pizza with a perfectly browned crust.

If you’re familiar with this problem but don’t know what to do about it-like I did- then the following information should prove to be very useful for you.

Your crust may not brown properly because of the following reasons:

The above only gives you the cursory details but I’m sure that you may wonder how exactly the above actions lead to your crust not browning.

The following is a descriptive list that goes through some of the reasons why your pizza crust doesn’t brown.

The Reasons Why Your Pizza Crust Doesn’t Brown

So what exactly happens to cause your pizza to not brown as a result of using the wrong flour, over-fermenting your dough etc.

If you’re not a professionally trained chef, these distinctions may seem arbitrary or needless to you. But they’re actually very important, and this is why

Many homemade pizza makers have a tendency to use “00” grade flour as a base for making their dough. 00 flour, created by Italians to be very fine and white, is not ideal for homemade pizza creation.

This is because it was created to be heated in very extreme temperatures in hot-wood fired ovens.

Because of this extreme heat, utilizing this flour for purposes of expedient and quick browning is unsuitable and therefore using it on homemade pizzas will not yield the browning results that you may be looking for.

It Was Not Cooked Long Enough

As obvious as this may seem, it’s still important to take note of. Browning happens at high temperatures as a consequence of the “Maillard reaction” which occurs between amino acids and sugars.

This is equivalent to toasting marshmallows or searing steaks, therefore your pizza crust needs to be exposed to high temperatures long enough for it to brown.

A lot of beginners will-quite understandably- want to shy away from cooking their pizzas for long enough. This may be mostly due to the fear of burning the pizza and making a charred, inedible creation as your end result.

Nonetheless, always keep a ready, vigilant eye on your pizza as a measure against burning while ensuring that you don’t take it out of the oven prematurely.

The Temperature Of The Oven Wasn’t High/Hot Enough

Always adhere to the general rule of keeping high temperatures at all times when cooking pizza as a principle of best practice.

The effect that heat has on pizza is the one it has on most dough mixtures, which is to make the pizza dough rise quickly and give the crust a brown texture on the surface.

The heat is the key component in ensuring that the sugars in the dough turn darker and brown the texture of the dough.

Furthermore, the extended cooking times of low temperatures tend to dry out the dough mixture of the pizza and thus make it tough.

You Didn’t Use The Right Equipment/Ingredients

A thick slab of mass called a pizza stone is the best equipment to use when cooking pizza in a home oven. It heats up prior to the cooking process begins.

A more or less similar tool called a pizza steel is another alternative that you can use and it’ll help conduct the heat used in the cooking process even better.

These materials generally ensure that the heat in the oven remains stable at high temperatures and that the base of the dough mixture cooks through really well.

Your Dough Was Over-Fermented

This is a fairly new but increasingly relevant issue when dealing with pizza crusts that don’t brown.

The idea behind it is that we can induce an excess of fermentation with the use of too much yeast that consumes all the sugars in the dough mixture needed for browning.

If you want to know whether or not you’ve over-fermented your dough, look for a rise in the dough due to gas followed by a fall as a result of deflation.

Other common signs include a strong smell of brewed beer and when handled it should feel weak and floppy.

These core problems regarding non-browning pizza crusts are not exclusive and/or discreet in occurrence.

They can and will often appear simultaneously with each other and there is a growing understanding that some may even have a causal relationship.

For example, a pizza dough that is under-cooked due to not being cooked long enough may be a result of the cook not using temperatures that are high enough to cook the dough thoroughly within the allotted cooking time.

So now that I’ve touched on the working knowledge and understanding behind some of the reasons why your pizza crust may not brown, I want to briefly look at some of the solutions to this problem.

🚨 BTW, if you are the type that cares about perfectly browned pizza crust, you must read our Guide to Cornicione!

Tips To Ensure That Your Pizza Is Always Perfectly Browned

Most measures that people advocate stem from adjusting those actions that lead to the problem occurring in the first place as the most prudent solutions. In this regard, there are two measures that I think people should consider.

Ferment Your Dough For Longer

Though fermenting your dough for longer poses a risk of over-fermentation, this isn’t always the case.

In fact, if you try using less yeast while fermenting your dough for longer hours (approximately 24 to 48 hours) in a fridge then the risk of over-fermentation is eliminated.

The idea behind this is that the gluten in the dough becomes less tight, allowing thinner bubbles to form and brown quickly.

Add Sugar In The Dough Mixture

Dough as a substance by itself has proteins and sugars which enable the browning process to occur naturally in your pizza crust.

Adding more sugar into a dough mixture expedites the browning process because more sugar means the dough browns quicker and easier as a result of having more sugar to use.

Also, besides naturally browning your dough mixture more easily and faster, it also sweetens the dough, which goes a long way into making your crust deliciously edible.

Besides adding the sugar directly into your dough mixture you can try the option of brushing it over the crust and/or mix it into water before putting it into the oven.

There are mainly five reasons why your pizza crust may not be browning. Most of them are avoidable even if you’re a fairly new homemade pizza cook.

Just use the two solutions mentioned above and you should be good for the most part.

Always consider fermenting your dough for longer periods and adding more sugar to your dough mixture.

These instructive tips are there to make sure that the browning process always takes place when you’re making your homemade pizza. Do this, and your homemade pizza making experiences will be enjoyable well into the foreseeable future. Ooni or Unni? Here’s The Deal

Which Is Better: Ooni Gas or Wood Pizza Ovens? 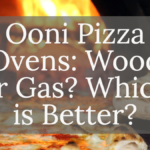